The year is 2006. The biggest producer of uranium in the world, Cameco, announces that Cigar Lake mine, the largest undeveloped high-grade uranium ore deposits in the world, has flooded again and uranium production there will take longer than expected to get started. Uranium prices, which had increased by 5-fold until then, took off in a big manner.

As we can see from the chart below, uranium prices are quite volatile and it moves in very easy-to-spot cycles. 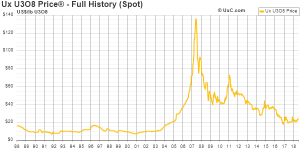 The returns for investors who were able to take on the high volatility and invest in the mining companies were nothing short of astonishing, as we can see from the table below (source: SMITH WEEKLY INTERNATIONAL RESEARCH):

So, why am I talking about this now? Well, I believe this sector is due to repeat the previous cycle, i.e., I believe that the uranium price has achieved its lowest point in the cycle last year and now the tide has turned, and the price swing will happen in a way more aggressive manner.

The previous uranium cycle was driven by a perception (and, as proven later, reality) of increased demand from countries like China, Russia and India. This new cycle, on top of the strong demand from these countries, counts with another push: the decrease in the number of operating mines, the total lack of new developments and destruction of supply, which is way more problematic and make cycles more pronounced.

One thing is to ramp up production on an active mine. Another thing, way more complex, costly and long-lasting is to (re)start production. It may take years until the mine that has been put into care and maintenance is able to go back to production again and it requires a much higher and sustainable uranium price to convince managers to do that.

The uranium price has been on a decline for many years now and has achieved an unsustainable plateau, at around US$26 per pound. At these levels, it has almost completely obliterated the search for new deposits, not to mention the construction of new mines. The spot price is way below the cost of production of most mines in the world (chart below). 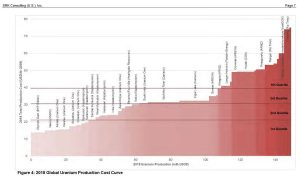 As we can see from the chart above, the current annual consumption is around 175 million pounds, and it can only be profitably mined at prices above $70 per pound, which translates into a price increase of almost 200% from where we are now. Sure, if prices were to go up in a substantial manner, we would see some producers re-starting their mines. There are many mines that are profitable with prices below $70, but they are either not developed or put into care and maintenance and will not get back into operation until they see sustainable and much higher prices.

As the saying goes, the cure for low prices is low prices. And that´s what we have got! And that is precisely where the big opportunity lies. So, the falling uranium prices contributed to the lack of investments in new mines and exploration in the past few years and this, in turn, will prove to be a windfall for investors in the future.

But before I start talking about the opportunity, it is important to know why prices are so low and why they have remained low for so long.

Fukushima played an important part in these developments. After the disaster, Japan, one of the largest buyers of uranium, reduced its purchases dramatically. Because of the importance of uranium and the large quantities of inventory, the impact in the uranium market has been huge.

Excess inventory and lack of new buyers drove prices down and some mines, in order to keep afloat, produced even more uranium than before (“we lose a little on every sale but we make it up in volume”). This perfect storm has led to a downturn in the market that lasted until last year.

I believe 2017 was the turning point in the sector. After years of low prices (and getting lower), cuts in production from Cameco and Kazatomprom, the two biggest producers, reduced the supply and (most likely) marked the bottom of the market. Together, these cuts removed circa 21million pounds of uranium from the market and signalized to the utility companies that, unless a higher price is achieved, the uranium will be better staying in the ground.

I cannot stress enough the importance of this move. It could be expected that Cameco, a listed company and responsible producer, would take steps like this. As the supply of the commodity is limited, they should be able to mine it only when the price is interesting to them. Despite pressures from unions, the Canadians stood their ground.

But the Kazakhs thought differently – at least until last year. But finally, the mentality of “whatever loss we have in price we make up in volume” seems to be over in Kazakhstan, the world´s largest producer. Besides, Kazatomprom aims to IPO itself in 2018 (JP Morgan should be the prime broker) and lower uranium prices combined with lower (if that) profitability are not going to be good for the stock. In addition, the easy-to-mine uranium is becoming scarcer in Kazakhstan and the cost of production should go up from here.

To top  it off, new developments have occurred recently and show that the mine companies are on the same page (finally) regarding this: in June Paladin has put Langer Heinrich into care and maintenance, Cameco is buying in the spot market 5M lbs of uranium to lend it to Orevo, the Kazakhs have come forward and cut production even more, the Department of Commerce in the US has suspended the barter system (accounts for circa 4M lbs of uranium per year) from 2019 onwards and Yellow Cake, a fund that was listed in London recently, is acquiring 8.1million pounds of uranium (circa 25% of Kazatomprom´s production) from the Kazakhs in the physical market. The amount of uranium being taken out of the system is incredible and should definitely help sustain higher prices for the commodity.

Besides, the Section 232 petition filed with the US Department of Commerce by a few American uranium producers, which, in my opinion, is nothing  more than a beg for subsidizing the industry, adds more uncertainties in the sector.

The production of uranium in 2018 is estimated to be around 150million pounds (so far, not accounting for further reductions) and the demand, which is quite predictable, should be around 175million pounds. The difference is acquired through secondary suppliers (and inventory being drowned).

Uranium delivers a clean energy, vital to the development of many countries, where the pollution has achieved extremely high levels. Any country that claims to have a clean energy policy will have to have nuclear power in its portfolio. China knows this and it is investing heavily in the sector (see chart below).

There are more reactors in operation and under construction in the world (453) today than in March 2011, pre-Fukushima. It´s a growing industry and the scenario is quite compelling, especially in China (biggest growth story), Russia and India. And yet, the price of uranium is a third of what it was in 2011. It´s a market in which the (bad) sentiment is stronger than the fundamentals – for now…

So, how do we profit from the upcoming bull market in uranium? In my opinion, the most profitable (and risky) way to get exposure to the upturn in the uranium cycle is investing in a few selected mining company stocks. And I have visited many companies in the past few months, discussed with various analysts and sector experts to come up with a few interesting names that I believe will deliver strong results in the years to come.

Currently, uranium stocks are despised by the financial crowd, and with all that I have exposed above, it normally means that high returns are just around the corner. The uranium elastic band has been stretched so much to one side, that the coming bull market should make huge profits for the savvy investor, once the elastic band swings back.

I believe that the uranium sector provides the single best investment opportunity at the moment. There will not be any excuses for not taking advantage of this upcoming bull market!

It is probably nothing that is going to happen in the next few days, but over the next few months and years, and one has a great chance to invest in a depressed security, whose price is close to the bottom and rising, demand increasing and supply being destructed at this stage. In other words, the relationship between return and risk is at its best at the moment.

Well written with the exception of the 232 being a beg.
A min quoted is definitly warranted on all stategic levels. Look for a bifurcated market where USA u308
is 2x global term. .