The opportunity of a decade

I have already written here about uranium and the potential for this metal´s price increase. Now, on its way, is an update on the sector. I not only remain bullish on my previous analysis, but I have doubled down on it, increasing my own position in the sector by more than 100%.

The uranium price has been on a decline for many years now and has achieved an unsustainable plateau, at the lower $20´s per pound. At these levels, it has completely obliterated the search for new deposits, not to mention the construction of new mines. The spot price is way below the cost of production of most mines in the world. 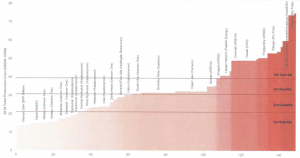 As we can see from the chart above, the current annual consumption is around 170 million pounds, and it can only be profitably mined at prices above $70 per pound, which translates into a price increase of over 200% from where we are now.

As the saying goes, the cure for low prices is low prices. And that´s what we have got! And that is precisely where the big opportunity lies.

But before I start talking about the opportunity, it is important to know why prices are so low and why they have remained low for so long. I am not going to talk about Fukushima, the disarmament program and the rise of Kazakhstan as the major producer, because I have done it already in my previous article.

This time I will talk about the utility companies, the ones that buy the uranium, and why they are not coming to the market… yet.

As one can easily infer by looking at the prices and the desire from utilities to come to the market and sign long term contracts, there is just too much inventory hanging about. Estimates from professional consultants in the sector appoint to a current inventory of around 1.8 billion pounds.

One would think that this is too much and would probably stop delving into it, but I decided to go a bit further and see what is the real mobile inventory out there.

Governments have around 1/3 of it. Most of this inventory consists in depleted tailings, which require a much higher price to be converted and used. Utilities have around 53% and they like to keep, on average, 3 years of consumption (I will not go into details here, but Chinese and Japanese inventories are quite high, whilst Europeans are not that high. In addition, part of this inventory is in the pipeline to be enriched). Finally, traders hold around 10-15% of the inventory.

So, if one looks deeply into this inventory, (s)he will notice that there is only 365 million pounds in excess inventory. This is definitely nothing to sneeze at, but here lies another distinction: what is really mobile and what is not. After visiting many companies and talking to experienced analysts in the field, I believe that only 10% (if that) of this inventory is really mobile. Also, it is good to know that in a rising market, the inventory that is mobile becomes immobile.

Cameco has already announced in its latest conference call that it will go to the market and it will buy inventory from the market to honour outstanding contracts. In the call, management was emphatic to say that they will see how deep this market really is and how much they can really buy. We only have to wait and see.

By the way, I expect McArthur River to remain closed for the foreseeable future, as the price of uranium has not picked up and it will look silly for them to re-start a mine after only 10 months of “care and maintenance”. Here lies a big risk for uranium: if Cameco re-starts McArthur River, we can see a downturn in the uranium prices, as sentiment may turn very bearish. The decision should be made in the next few months, so we will know by then.

As we can see, utilities have very little incentive to come to the market and sign long term contracts with the uranium producers, as they have inventory for the next few years and are able to pick up more in the market now for circa $20 a pound (and no producer will sign a long term contract to deliver uranium at a price lower than $40).

But not signing a long term contract now means that these utility companies are uncovered in their demand after a few years and it will create a perfect storm: low prices, low production, low inventories and higher demand (China is building almost 1 reactor every 7 weeks!).

Noting that the low production will come from mine closures, less projects (if any) coming to the market, and mines put into care and maintenance. This is a very different situation than if the demand has only increased. Operating mines can ramp up production with relative ease. Mines that have been shut down may take many years to come back into production.

All these combined could cause a “rush to the door” from the utility companies trying to sign long term contracts to secure their uranium needs. Prices might go up almost vertically, as utilities don´t suffer too much the impact of higher uranium prices (their lawyer bills are probably higher), but they need a reliable source of uranium to continue operating.

The opportunity is staring us in the eye. The ones who have the courage to act and deal with volatility now may be rewarded big time in the years to come.