For a few years now I´ve been hearing that the Australian property market is unaffordable and is heading one way, and that´s down. Famous hedge fund manager Jeremy Grantham, who helps manage over USD100 billion at GMO, the company he founded, called it a speculative bubble back in 2010. A couple of years later, he said “tell a European you think there’s a housing bubble and you’ll have a reasonable discussion. Tell an Australian and you’ll have World War III. Been there, done that!”. Well, since that phrase came out, property prices have more than doubled.

It is not an easy market to bet against, that´s for sure. Australia seems to be a one  two-trick pony (real estate and mining). And if one wants to bet against one of the pillars of the Australian growth –which, by the way, just reached 26 years without a recession – one has to endure some pain on the way, if ever successful. But, things might be changing…

There are two obvious ways to participate in this decline, if you really believe it will happen. One can either short the banks (huge piles of mortgage) or the real estate companies (huge inventory). Obviously, timing is of essence for the shorts.

Moodys, the risk agency famous for being late in its calls (together with S&P and Fitch), was very political at the end of last year saying that “…our base case is that house price growth will slow in Canada and Australia…” and adding, in regards to the banks, that “we have recently taken rating actions on banks in these systems to reflect this risk, although they remain among our most highly rated banks globally,”. Well, let´s wait and see.

On the surface, the fundamentals for Australia have been great. As mentioned, 26 years without a recession ended up leading the country to low jobless rate, a great sense of security, a weak balance sheet and the fear of missing out in the property markets.

However, the household debt in Australia is quite high, reaching almost 200% of disposable income (see chart below). As income growth remains stable, this number should rise in the next few years. 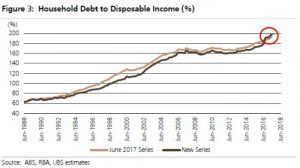 Besides, the cost of living in Australia has been rising. Sydney, which is Australia´s most expensive city to live, has gone up to number 32 in the world cost of living index, compiled by numbeo.com. The other big Australian cities have been going up too.

So, at the moment and over the next few years, Australians might face a few problems: incomes are stagnant whilst the cost of living has been rising and affordability has fallen. Besides, the Australian Prudential Regulation Authority (APRA) crackdown on interest only loans to limit risky lending has resulted in the share of interest-only loans plunging by nearly half in just three months. On top of that, the banks are trying to improve their lending standards (making it a little more difficult for liar loans to be granted), putting a damp in this market.

Interest only mortgages were very popular in the UK a few years ago, having reached 16% of all loans for investment properties. Since then, the UK authorities deemed those to be risky and not beneficial to the country and decided to curb them. Today, they represent only 7%. In Australia, the interest only mortgages for investment properties are now responsible for 36% of the total lending. It´s more than twice the amount in the UK “pre-reform”, which was considered high.

Interest rates are going up in the US and in the UK, which obviously put some pressure on the Aussie Dollar. Will the RBA manage to keep interest rates as they are or will they be obliged to increase rates? Many are betting that rates should go up in Australia by the end of the year, something that could derail this market. Lower affordability combined with high interest rates are definitely not good for the property market.

Coming back to the cost of living, at present, circa 900 thousand households are having difficulties making the mortgage payments already. Combine this with a slowing investment appetite by the general public and a curb in the purchase of properties by foreigners and you have a pretty grim scenario.

There is barely any capital growth in the housing market nowadays, especially in the big cities, and the government is trying to let some air come out of this bubble by increasing regulation and increasing lending restrictions.

If one looks into the developers, the situation is not much better. It is supposed to come to the market, in the next 6 to 18 months, another 200,000 properties (Digital Finance Analytics). This will put some pressure on them to move “inventory” fast, at the same time that interest in new properties starts to fade and lending restrictions make it more difficult for potential buyers.

On top of it all, there is the cross-leverage segment, which is not fully understood – but something tells me that soon enough we are going to be able to gauge the wrecks caused by this. Cross-leverage takes place when one uses the home equity to fund another property purchase. It happens also when parents try to help their kids climb onto the property ladder by lending / giving them part of the home equity, so kids can buy a house.

Most of the Australian bank´s profits come from lending to the real estate market, an estimated 65% of the profits. There are four major banks in Australia (NAB, CBA, ANZ and WBC) who between them hold 80% of the home loan markets in the country, with assets amounting to over 200% of Australia´s GDP.

Suddenly there is this combination of enormous supply coming to the market, together with more strict lending rules, rising cost of living, no household income growth, values of properties stagnant, less buyers in the market (low affordability and less foreigner purchases), 36% of loans for investment properties are interest only (and 50% of the buyers have no idea on how to repay the debt, which means that some are not going to) and high household debt. This is a recipe for disaster.

The sector should be more affected from 2019 onwards and we are looking into profiting from the unsustainable situation. Obviously, the government will try to take air out of this bubble, but we doubt it can be done without some discomfort.

We would like to join forces with other hedge fund managers who diligently suggested that this is one of the biggest bubbles of the modern times. Trees do not grow to the sky and property prices in Australia will not either. It´s time to be careful, not greedy.