The Beginning of the End
Over the weekend, the lines in Greece stretched along the street. Around the corner. Down the block. Lines to get cash. Lines to buy gas. Lines of people eager to get their hands on something of value. Food. Fuel. Cash. Pity the poor guy who was last in line …

… the poor taxi driver, for example, standing behind 300 other people, trying to get 200 lousy euros out of an ATM. Like a tragic nightclub customer … among the last to smell the smoke. By the time he headed for the exit, it was clogged with desperate people, all struggling to get through the same narrow door at the same time.

Being the last in line usually means you have waited too long.

The Dow lost 350 points on Monday – its biggest point drop in two years. On Tuesday, Greece was expected to default on a $1.7-billion payment to the International Monetary Fund (IMF). And on the other side of the planet, analysts are looking at “the beginning of the end for Chinese stocks.”

We doubt it is the beginning of the end. More likely, it is just the end of the beginning. On Friday, the People’s Bank of China cut rates to a record low, after stocks in Shanghai slipped 7% in a single day (the equivalent of about 1,300 points on the Dow).

Analysts expected a big rally in response to the rate cut. Instead, the Shanghai Index plunged again on Monday, dropping 3%. Greece… China… said one commentator interviewed by Bloomberg: “You have a potentially very ugly situation this week.”

Our guess: Stocks in the U.S. and China have topped out. Old-timer Richard Russell, who has been studying markets since 1958, agrees:

I believe the top has appeared, like the proverbial thief in the night. The Dow has fallen below the 18,000-point level, and is now negative for the year. The Transports, which have led the way recently, are down triple digits for today and are only 89 points above the critical level of 8,000. The Nasdaq has closed under 5,000. At the market’s close, gold was up 5.3 at 1,179.

When Gold Is Declared Illegal …

But wait … What about silver and gold? As regular readers know, we recommend having some cash on hand in case of a monetary emergency. But a reader asks:

First, precious metals aren’t illegal, so far. Second, making something illegal doesn’t necessarily make it unpopular. President Roosevelt banned gold in 1933. The feds wanted complete control of money. The dollar was backed by gold. So getting control of the dollar meant getting control of gold.

Once the feds had the gold, they could devalue the dollar by resetting the dollar-gold price from $20 to $35. In an instant, people lost more than 40% of their wealth (as measured by gold).

That ban lasted for 42 years. It ended in 1975, largely because of our old friend Jim Blanchard. Jim set up the National Committee to Legalize Gold and worked hard to get the ban lifted.

Today, the feds don’t need to outlaw gold. It is regarded as “just another asset,” like Van Gogh paintings or ’66 Corvettes. Few people own it. Few people care – not even the feds. They are unlikely to pay much attention to it – at least, for now.

That could change when the lines begin to grow longer. Smart people will turn to gold… not just in time, but just in case. It is a form of cash – traditionally, the best form. You can control it. And with it, you can trade for fuel, food, and other forms of wealth. Lots of things can go wrong in a crisis. Cash helps you get through it.

Generally, the price of gold rises with uncertainty and desperation. Gold is useful. Like Bitcoin and dollars in hand (as opposed to dollars the bank owes you), gold is not under the thumb of the government … or the banks. You don’t have to stand in line to get it. Or to spend it.

Yes, as more and more people turn to gold as a way to avoid standing in lines, the feds could ban it again. But when we close our eyes and try to peer into a world where gold is illegal, what we see is a world where we want it more than ever.

Buy it as long as nobody cares about it. By the time they care, you’ll want to have as much as possible.

In this interview, Marcelo López explains in detail the entire thesis of investing in uranium 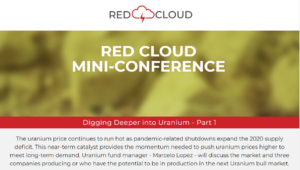 In this webinar, Marcelo López discusses recent events in the uranium sector and talks about expectations for the future.